A tasty holiday season service project for these times when people need comfort so much – home made apple pies! Give them and share them!

So the idea is to get pies to your neighbors and also to people you know are in need, whether it is just someone who needs to feel more connected,
or someone in a facility of some kind. 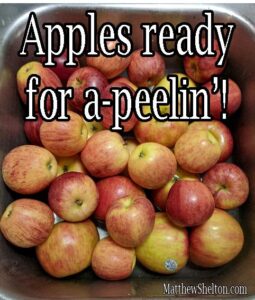 There’s just something comforting about apple pies, especially if they are homemade.

The pie filling has no sugar added.

There are lots of recipes that say no sugar added but include apple pie concentrate juice – which is a way of adding sugar.

But this recipe and these pies don’t have added sugar – so don’t be surprised if it’s not as sweet as what you’re used to getting from the bakery.

There is cornstarch in the recipe but it is only 1/4 of a cup for 8 cups of apples, so it is not much at all. Cornstarch is basically a refined carb.

If you look at the ingredients list for your typical pie that you buy from the grocery store, the list is very long, with things that you really could do without. Same with if you buy pre-made crust.

A lot of them are preservatives, and in that regard these pies of course are best eaten sooner than later, but will last 4 days or so in the refrigerator. (Ha! Who has that kind of will power! 😉)

And for the pie crust

And for the song with lyrics: Beneath the Crust

This website is bare-bones at the moment, but feel free to contact me if you have any questions or comments – thank you so much!

We use cookies on our website to give you the most relevant experience by remembering your preferences and repeat visits. By clicking “Accept”, you consent to the use of ALL the cookies.
Do not sell my personal information.
Cookie SettingsAccept
Manage consent

This website uses cookies to improve your experience while you navigate through the website. Out of these, the cookies that are categorized as necessary are stored on your browser as they are essential for the working of basic functionalities of the website. We also use third-party cookies that help us analyze and understand how you use this website. These cookies will be stored in your browser only with your consent. You also have the option to opt-out of these cookies. But opting out of some of these cookies may affect your browsing experience.
Necessary Always Enabled
Necessary cookies are absolutely essential for the website to function properly. These cookies ensure basic functionalities and security features of the website, anonymously.
Functional
Functional cookies help to perform certain functionalities like sharing the content of the website on social media platforms, collect feedbacks, and other third-party features.
Performance
Performance cookies are used to understand and analyze the key performance indexes of the website which helps in delivering a better user experience for the visitors.
Analytics
Analytical cookies are used to understand how visitors interact with the website. These cookies help provide information on metrics the number of visitors, bounce rate, traffic source, etc.
Advertisement
Advertisement cookies are used to provide visitors with relevant ads and marketing campaigns. These cookies track visitors across websites and collect information to provide customized ads.
Others
Other uncategorized cookies are those that are being analyzed and have not been classified into a category as yet.
SAVE & ACCEPT
The owner of this website is a participant in the Amazon Services LLC Associates Program, an affiliate advertising program designed to provide a means for sites to earn advertising fees by advertising and linking to Amazon properties including, but not limited to, amazon.com, endless.com, myhabit.com, smallparts.com, or amazonwireless.com.
Home Privacy Policy Terms Of Use applepie applepie Affiliate Disclosure Amazon Affiliate Disclaimer DMCA Earnings Disclaimer